From the Stack: The War at Ellsmere

I thought Faith Erin Hicks’ Zombies Calling (SLG) was “one of those books that make you really eager to see what the creator does next.” Hicks rewards that eagerness (and proves me right) with The War at Ellsmere (also from SLG), which is superior in just about every way. And Zombies Calling was pretty good to begin with. 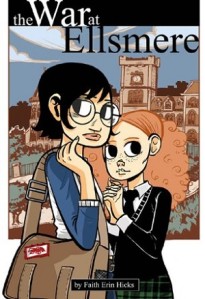 Zombies Calling owed a fair bit to Scream for its humor and structure, and Ellsmere seems to be similarly sourced. Like good-hearted grind Rory from the early years of The Gilmore Girls, Ellsmere’s Juniper wins enrollment into a prestigious private school (via scholarship instead of grandparental largesse, in Jun’s case) and immediately draws the threatened attention of the institution’s self-appointed queen bee. On Gilmore, that queen bee was the highly strung overachiever Paris Gellar; in Ellsmere, it’s the smirking, vicious Emily,

From those core similarities, Hicks diverges in some promising ways. Jun is nowhere near as dewy and perfect as Rory; she’s much more likely to make a preemptive verbal strike than keep her head down and her nose in a book. And while Paris was neurotically fixated on what Rory’s abilities and accomplishments said about her own, Emily is more absorbed by class differences. She has a rigid set of expectations of scholarship students and their place in Ellsmere’s elite ecosystem.

And while Paris was one of the defining “frienemies” of her era, no one should expect Jun and Emily to be sharing secrets in a stairwell any time soon. Instead, Hicks splits the frienemy egg and gives Jun an ally on the inside. Jun’s roommate, Cassie, is just as pedigreed as Emily, and she’s been at Ellsmere just as long, but Cassie’s quirks have isolated her just as effectively as Jun’s relative poverty will. Jun and Cassie bond quickly and believably. Jun inspires Cassie to raise her academic expectations, or at least to apply herself in ways that interest her. Flakiness aside, Cassie knows how Ellsmere works, and she can advise Jun on the ins and outs; she’s a good listener and she makes Jun laugh. Cassie made me laugh, too. The Jun-Emily rivalry takes up most of the narrative, but I kept turning my attention to Cassie’s evolution. It’s measured, credible and rewarding.

For all of the book’s easy charm, it’s very tightly written. Hicks finds a solid, compelling plot in Jun’s first year at Ellsmere. She fleshes it out nicely with well-developed characters and, more importantly, chemistry among those characters. That’s a really important next step, and I think some creators may neglect it. There also seems to be more confidence in terms of voicing characters here than in Zombies Calling; there’s a similarly metatextual quality to the dialogue, but it’s dedicated more to the characters’ feelings than the shifting rules of zombie combat.

I was sure that Hicks’ follow-up to Zombies Calling would be an improvement, and I feel the same about whatever comes after Ellsmere. And while I wouldn’t want to paint Hicks into a corner when she’s clearly got a very portable skill set as a creator, I’d love to see what happens next to Jun, Cassie and Emily.

From the stack, Slave Labor Graphics |