I thought that by now I surely would have devoted at least one License Request Day to a work by one of the members of the Year 24 Group of pioneering shôjo manga-ka. It’s time to rectify that, as their works are sorely neglected. Vertical has done a great service by publishing two of Keiko Takemiya’s science-fiction shônen works, To Terra… and Andromeda Stories, and, if you have the tenacity and the resources, you can probably still find copies of Viz’s out-of-print A, A-Prime (Moto Hagio) and Four Shojo Stories (by Hagio, Keiko Nishi and Shio Satô). But someone somewhere would earn a lot of goodwill (with me, at least) were they to license and publish Riyoko Ikeda’s The Rose of Versailles.

As near as I can determine, two English-language volumes (translated by no less than Frederik L. Schodt) were published by a shop called Sanyusha in the early 1980s. Schodt included a sample in Manga! Manga! The World of Japanese Comics, but that’s the largest quantity that’s even close to readily available. The book has been published in South Korea (Daiwon C.I.), France (Kana), Germany (Carlsen Comics), and Spain (Azake Ediciones), so basically we’re behind just about everyone.

Originally serialized in Viz co-owner Shueisha’s Margaret magazine, the comic has seen all kinds of prestige printings since its original run. It’s been adapted into an anime, a movie and a stage musical. Now, lots of comics have been turned into animated series and motion pictures, but a musical? That, my friends, is hardcore. So what’s the appeal? Let’s start with noted shôjo scholar Matt Thorn’s description:

“The genre of shôjo manga really burst into the popular consciousness, however, in 1972 with the huge success of Ikeda Riyoko’s Berusaiyu no bara (“The Rose of Versailles”), which features a woman, Oscar, who was raised to behave and dress as a man. A captain in the French army, Oscar manages to draws the romantic interest of both Andre (a man who is a subordinate in the unit she commands, as well as a childhood friend) and of Marie Antoinette, whom she serves as personal bodyguard.”

Deborah Shamoon of the University of Notre Dame noted that the series “began as a frothy romance for girls, but by the end had become a serious examination of gender roles and political issues. This transformation encapsulates the larger changes in shôjo manga in the 1970s, when authors used melodramatic conventions received from earlier shôjo magazines and novels, to create stories that explored the psychological interiority and sexual agency of girls.”

I don’t usually single out an English-language publisher in these pieces, but I’ll make an exception here. Viz, your Signature imprint has become perhaps the go-to purveyor of deeply satisfying, commercially risky material. Go a step further and fold some more classics into the mix, starting with a handsome, library-friendly, hardcover edition of The Rose of Versailles. (And you could put the Hagio books back in print while you’re at it.) 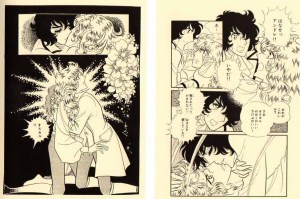 This entry was posted on Friday, June 12th, 2009 at 4:40 am and is filed under License requests. You can follow any responses to this entry through the RSS 2.0 feed. Both comments and pings are currently closed.

16 Responses to License Request Day: The Rose of Versailles