One of those random bits of curiosity has taken root, and I might try and get a column out of it if I can find sources. So, does anyone know of any folks who are teaching or have taught introductory manga courses at the college or university level? I’m thinking primarily of survey courses rather than ones that focus on creating comics. If you know of anyone, or if you’ve taught such a course yourself, drop me a line. 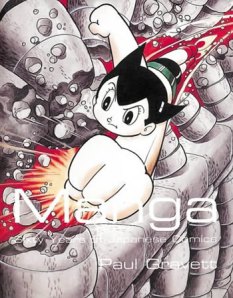 I think if I were constructing a course like that, I would probably use Paul Gravett’s Manga: Sixty Years of Japanese Comics as the primary text. I like the book’s structure, and I think it provides a great overview of the history and various demographic categories. It’s also packed with illustrations from all kinds of titles (including a rather energetic hamster-like creature that got the book banned in Victorville, California).

The reading list would be tricky. I would want to include examples from the major demographic categories (shônen, shôjo, seinen, josei), but I think I’d have to be careful to find stuff that’s representative but doesn’t end up in a cripplingly expensive trip to the bookstore. That would mean picking titles that give a reasonable amount of story in a single volume but still do a good job embodying certain common traits about the category. I’d probably just plan on taking whatever lumps come in the form of complaints about not getting the full story. (I could always include a paragraph on the syllabus that gives the total price tag for complete series included on the reading list; some of the best examples are really long, and even if the price of individual volumes isn’t that high, when you ask someone to buy twenty of them…)

I’d also want to include works by the greats, particularly Osamu Tezuka. That gets a little tricky too, as I’d want something relatively accessible. Astro Boy seems like a reasonable enough choice in terms of accessibility (and Dark Horse offers this two-volume paperback), though I’d much rather have them read something like Ode to Kirihito. Since there’s so little of the work from the Year 24 Group available in print and in English, I’d turn to Vertical for To Terra… (I know it isn’t shôjo, but it’s a great book, and it provides an early example of a woman creating comics targeted at boys, which seems like an interesting teachable moment.)

I’d probably leave anime to the film studies program, or whatever those units are called these days.

So what would you include on your reading list?