License Request Day: What Did You Eat Yesterday? 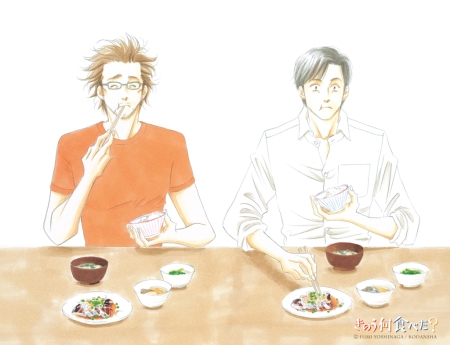 Many may feel that I’m squandering this week’s license request on a sure thing. There are few manga-ka who have had as much of their work translated into English as Fumi Yoshinaga, so the licensing of her current food-fixated comedy, What Did You Eat Yesterday?, seems like a given. But you know what? I like saying nice things about Fumi Yoshinaga, so you’ll just have to put up with it.

What Did You Eat Yesterday? is being serialized in Kodansha’s Morning magazine, a font of some of some of the best manga currently available in English and a reliable resource for wish-list composition (just slightly less reliable than Kodansha’s Afternoon). It’s about a gay couple’s life as viewed through the prism of what they eat. One’s a lawyer who’s a gourmet cook; the other is a hairdresser who, if I know Yoshinaga, probably can’t make toast. There’s usually a disparity of culinary ability in her couples. Two volumes have been published so far, which seems kind of slim, but if English-reading Yoshinaga fans have demonstrated anything, it’s their willingness to wait.

Quite a bit of time elapsed between publication of the third and fourth volumes of Yoshinaga’s charming high-school comedy, Flower of Life (DMP). While fans would rather have had the concluding volume sooner than later, the results of this poll over at The Manga Critic indicate a healthy level of regard, tardy or not. Even more persuasive are the trends of this Manga Critic poll on hotly anticipated titles for the second half of 2009; Yoshinaga’s Ôoku (Viz) is right up there in the lead.

As anyone who’s read Yoshinaga’s Antique Bakery (DMP) knows, the results are almost always magical when she turns her attention to food. (And food never seems to be too far from her mind.) So whoever delivers this book to English-reading audiences will be regarded warmly and highly by lots and lots of people. If Kodansha ever gets its stateside operation up and running, it would be an outstanding debut title.

This entry was posted on Friday, July 17th, 2009 at 4:56 am and is filed under License requests. You can follow any responses to this entry through the RSS 2.0 feed. Both comments and pings are currently closed.

9 Responses to License Request Day: What Did You Eat Yesterday?