From the stack: Dogs Prelude Vol. 0 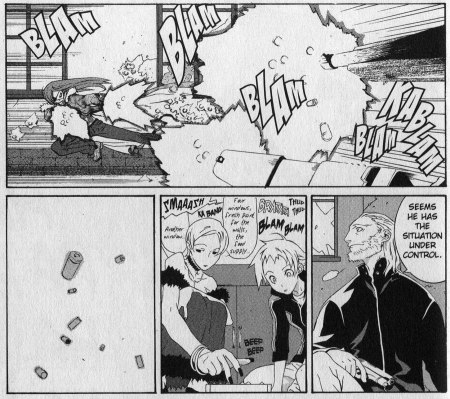 I suspect that Shirow Miwa is as much of a fan of Cowboy Bebop as I am. Miwa’s Dogs Prelude Vol. 0 shares a lot of that anime’s best qualities – vivid characters, an engaging look, and a lightness of touch that keeps the noir elements from going overboard. If anything, Miwa does a slightly better job on that last front.

That isn’t to suggest that Miwa’s milieu is a pleasant one. The book’s linked short stories are set in a futuristic dystopia full of sometimes terrible people doing what they need to do to get by. Like all good noir casts, the characters all have dark and painful secrets to tote around as they navigate these murky waters. Fortunately, Miwa doesn’t seem inclined to dwell. He doesn’t exactly minimize the suffering on display, but he doesn’t put it on a pedestal either.

I felt for Mihai, the aged killer looking for a quieter dotage. I enjoyed laughing at the misfortunes of Badou, the one-eyed snoop who can’t seem to make it through a day without inspiring gun-toting thugs to chase him down. Resilient, rough-trade Heine’s attempts to rescue an innocent prostitute offered a nice mix of mayhem and sentiment. 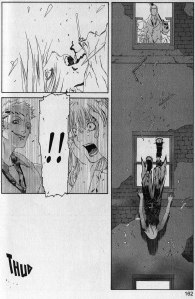 I was largely unmoved by the tale of Naoto, the young girl raised to be a killer by the man she believes murdered her parents. It’s in that segment that Miwa comes closest to flat, straight-faced noir, and while it’s executed well, it lacks the dollops of quirky, what-the-hell humor that characterize the rest of the book.

The most consistent and engaging quality of the book comes from Miwa’s illustrations. He’s prodigiously gifted with action sequences and character design, and it’s in drawing that his light touch really shines. He favors thin, elegant line work instead of the thick marker of despair so many cartoonists bust out when crafting a noir tale. Miwa isn’t afraid to go over the top with both violence and comedy, but it’s all anchored with subdued, dilapidated settings that don’t feel ostentatiously dystopian and, of course, the well-written, likeable cast. The look of the book is sleek, stylish, and frequently silly; it’s a great mix.

As the rather complicated title indicates, this volume of Dogs serves as a precursor to the evidently more structured ongoing series that launches in August. I’ll definitely check in if only to bask in Miwa’s gorgeous drawings, and I’m guessing I’ll stay for the quirky characters and cleverly conceived scenarios.

From the stack, Viz |