From the stack: Ikigami vol. 2

Ikigami: The Ultimate Limit (Viz) is about a governmental experiment in social engineering where random young people are killed to encourage the remainder of the citizenry a greater appreciation for life. The condemned are given 24 hours notice by the bureaucracy. You’d think the most engrossing material would come from how they spend their last day. In the second volume, as with the first, I was much more intrigued by the framing-device functionary who delivers the bad news and tries to make sure the people he notifies don’t do anything drastic.

This time around, our young bearer of bad news is finding that the grind of the job, the minute-to-minute demands and stresses, is blurring his underlying moral concerns. He’s becoming callous to his charges, a soulless paper pusher. 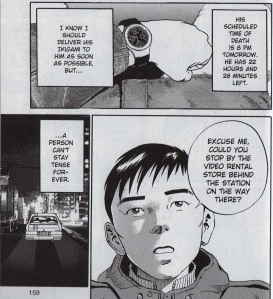 Scenes like the one above are chilling and very effective. They constitute a small fraction of the book as a whole, but they’re far and away the best reasons to read the book. These scant pages of context say more about a repugnant initiative than the portrayals of its victims.

That isn’t to say that those portrayals are bad, exactly. Creator Motoro Mase certainly has a penchant for melodrama and a reasonable enough aptitude for portraying it, but there’s a bluntness to these sequences that’s much less interesting than the sly, layered glimpses of the system’s operational details.

This time around, we get two contrasting stories. The first strains to teach a valuable lesson about drug abuse in a thoroughly by-the-numbers fashion. In my opinion, Nancy Reagan left addiction narratives dead on the side of the road before I could even drive a car, and Mase isn’t storyteller enough to resuscitate them. Is anybody?

The second is potentially more interesting, as Mase is daring enough to show the end of a life with real potential. In the abstract, it highlights the dreadful arbitrariness of the program and how harmful it can be to society, or at least a corner of it. Moment to moment, Mase is more concerned with the sentiment of the experience, which mutes the story’s potential to condemn.

But I keep coming back to those creepy, bureaucratic moments and the deft handling of tone and undercurrent they display. For now, they’re enough to carry me through the only average majority of the comic for the spikes of sneaky, economical subplot.

This entry was posted on Tuesday, September 8th, 2009 at 5:46 am and is filed under From the stack, Viz. You can follow any responses to this entry through the RSS 2.0 feed. Both comments and pings are currently closed.

One Response to From the stack: Ikigami vol. 2