From the stack: Stitches 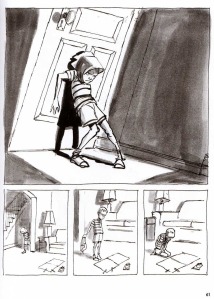 At the age of fourteen, Small checked into the hospital to have an apparently benign cyst removed. After two surgeries, he’s left with ravaged vocal cords and a ragged scar running down his neck. That’s the nut paragraph, but it isn’t what the book is really about. Like the growth on his neck, it’s a symptom of something much more insidious and destructive.

With an almost unnerving degree of understatement and precision, Small describes the parental failings that led him to that unfortunate state. He gradually reveals the depths of his mother’s dysfunction and his father’s ineffectuality, though he doesn’t reduce them to ridiculous monsters. They’re realistic people who are damaged in distressingly recognizable ways, and Small is left to try and escape the generational cycle.

Drawing is young David’s primary source of solace, and Small visually extrapolates on what that means to the child version of himself. In his private or reflective moments, the boy remakes the world and views it in ridiculous and sometimes grotesque ways. Small renders these moments well; they have the feel of a child’s gruesome imagination and, later, a teen-ager’s derisive dismissal of the adults around him. These flights of not-quite fancy fold in well with the more straightforward illustrations, and I feel that makes them more effective.

But honestly, I find just about everything effective about Stitches. It’s as focused and shaped a work of autobiography as I can remember reading. Small has taken pains to craft a narrative that’s effective in the same ways as fiction, and if the reader didn’t know it was based on actual events, I believe it would be viewed as a sterling example of a made-up story.

There’s no self-indulgence or waste evident here, but it’s not skeletal, either. There’s resonance to the characters and impact to the way events are sequenced and facts are revealed. And most of all, there is the sympathetic distance Small the grown-up cartoonist maintains from the angry, bewildered child he was. I cringe a little to say it just on general principle, but Stitches really is a searing and unforgettable book. 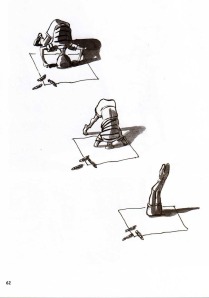