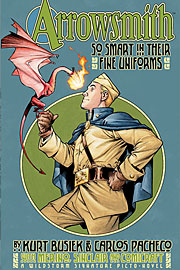 Hey, it’s Kurt Busiek’s birthday! He’s written a lot of comics that I’ve really enjoyed. He’s responsible for the last pleasant memories I have of Avengers comics, so I could recommend something like this. His first dozen issues of Thunderbolts were great, too, but I can’t even seem to find collections of those on Marvel’s web site. There’s always Astro City, that sideways glance at shared super-hero universes. I have a lot of respect for Busiek’s ethics of scripting super-hero fiction, I really do.

But for this edition of Birthday Book, I’m going to recommend something a little more obscure: the collected edition of Arrowsmith, written by Busiek and illustrated by Carlos Pacheo. This is one of those stories where actual events are reframed with an insertion of fantasy elements. It’s basically a world war with magic added, and it’s a very successful example of that genre. A small-town boy goes to war and becomes one of the military’s fearsome group of dragon wranglers. It’s a neat idea executed very well by all parties.

Comments Off on Birthday book: Arrowsmith |

I’m always glad to see shôjo titles rank in the manga section of The New York Times Graphic Book Best Sellers list. After a fairly long period where Natsuki Takaya’s near-perfect Fruits Basket (Tokyopop) seemed to carry that banner alone, other series have made regular appearances on the roster. And if they’re not precisely the titles I would wish were leading the sales pack, well, I’m glad all the same.

Still, if I had my way, Hinako Ashihara’s Sand Chronicles (Viz) would be earning sales that match its quality. It’s about a girl named Ann who moves to a small town with her unstable mother at the age of 12, then follows Ann and her friends through happiness, tears and all of the stuff in between those two extremes. It’s both precisely observed and effectively melodramatic, and the characters are wonderfully sympathetic, largely because Ashihara respects them enough to let them be jerks from time to time.

It was serialized in Viz’s late, lamented Shojo Beat, and its first three volumes were included in last year’s list of Great Graphic Novels for Teens, even earning a spot among the Top Ten. So it’s obviously well regarded. I mean, look at these reviews:

“Manga-ka Hinako Ashihara dares to believe that even children and teens have complicated lives that are riddled with anxiety as much as, if not more than, it is filled with carefree fun. Anything but a downer, however, Sand Chronicles is rich storytelling about the drama of life.” Leroy Douresseaux at Comic Book Bin

“Sand Chronicles continues to be a very strong story, showing off both the simplicity and complexity of ordinary teenagers trying to find their places in the world. It’s still one of the best titles I’ve read this year.” Ysabet Reinhardt MacFarlane at Manga Life

“Sand Chronicles isn’t about saving the world…or destroying it. These teenagers don’t have superpowers; their adolescent angst isn’t going to knock the planet from its orbit or reshape the destiny of humanity. That is not the sort of story Hinako Ashihara won a Shogakukan Manga Award for. No, rather, she was recognized for writing an affective story about realistic teenaged troubles and triumphs. In their little world of Tokyo and Shimane, what happens matters—it matters a lot—and best of all, it will matter to this series’ faithful readers as well.” Casey Brienza at Anime News Network

“Oh, the emotional turmoil is so hard-hitting! This series has gone from a wonderful bit of recognition at the complexities of relationships to a painful observation of the things people do that can hurt themselves and others when they aren’t willing to move on from traumatic moments.” Matthew Brady at Warren Peace Sings the Blues

“Granted, the usual romantic ups and downs provide plenty of tears and jeers, but the thoughtful slice-of-life framing and an eye for humanistic details floats this series to the top of the shojo tank. No one feels overly like a character trope, and Ashihara’s sense for the minute highs and lows of adolescence is a blessing in a series that could have been destined for average shelf status.” Chloe Ferguson at Manga Recon

If you like comics about real people with real problems that are executed with tremendous skill and sensitivity, you should give Sand Chronicles a try.

(Got a book you feel deserves some audience development? Like to write a guest column about it? E-mail me and we’ll see what we can do.)