PR: I’m not normally an anime fan, but…

I’ve heard that the animated version is even better than the comic, and I love the comic. Can this be true? 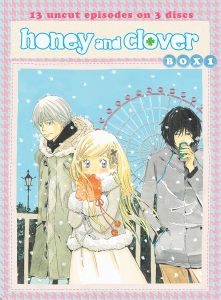 San Francisco, CA, September 17, 2009 – VIZ Media, LLC (VIZ Media), one of the entertainment industry’s most innovative and comprehensive publishing, animation and licensing companies, will release the first Uncut DVD Box Set for the animated Shojo title, HONEY AND CLOVER, on September 22, 2009. The 3-disc set featuring 13 episodes will be rated ‘T+’ for Older Teens and will carry an MSRP of $59.90 U.S. / $85.99 CAN.

Based on the popular manga series created by Chica Umino, HONEY AND CLOVER is a romantic comedy about a group of art school students who try to find their way through college. But when an innocent and talented 19-year-old girl enters their lives, things get a lot more complicated as love triangles result.

What do you get when you cross creativity with self-discovery and unrequited love? Art school! Yuta Takemoto has no idea what’s in store for his life when he enrolls at a Tokyo art college, but he finds out right away it’ll never be dull! Love triangles form as fast as friendships when both Takemoto and senior classmate Shinobu Morita fall hard for shy artistic prodigy Hagumi Hanamoto. And while architecture student Takumi Mayama secretly pines for an older woman, dazzling ceramicist Ayu Yamada pines for him! Confused yet? Welcome to the bittersweet world of HONEY AND CLOVER..

The HONEY AND CLOVER manga series was created by Chica Umino and has sold more than 5,300,000 copies in Japan. In 2003, the series won the 27th Kodansha Manga Award, Japan’s most prestigious comics award. The series was also adapted into an anime series in 2005 and finally into a live action film in 2006.

This entry was posted on Thursday, September 17th, 2009 at 7:08 pm and is filed under Anime, Press releases, Viz. You can follow any responses to this entry through the RSS 2.0 feed. Both comments and pings are currently closed.

One Response to PR: I’m not normally an anime fan, but…