Meanwhile, up at Javits

I’ll get into Vertical’s announcements from the New York Anime Festival at a later date (Monday, to be precise), but I did want to highlight some of the other on-deck properties that caught my eye. (Deb Aoki has the full list at About.Com.) 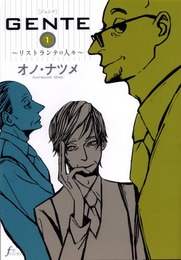 I’m finding myself increasingly taken with Natsume Ono’s House of Five Leaves with each new chapter that Viz posts, so Ono’s Gente will definitely be on my radar. I don’t really think older Italian men in aprons, at least of the kind who might appear in manga for grown-ups, need any help looking sexy, but that might just be me. It’s a follow-up to Ono’s Ristorante Paradiso, which Viz has scheduled for release in March 2010. Gente is due in July 2010.

My desire to read about ass-kicking fictional librarians has often left me disappointed, but I remain optimist enough to give Hiro Arikawa and Kiiro Yumi’s Library Wars: Love and War a try. It’s due in June 2010.

On the Del Rey front, I liked Kitchen Princess a lot, but I liked it mostly for Miyuki Kobayashi’s surprisingly moody writing rather than Natsumi Ando’s cute but generic art. That said, I’ll certainly give Arisa a try, even though it’s about identical twins who meet later in life, and I’m still gun-shy on that subject after the clinically insane second volume of Papillon.

Bonus points to Del Rey for publishing the rest of Hiro Mashima’s Rave Master after Kodansha pulled the license from Tokyopop three volumes before the end.

Tokyopop has certainly published an awful lot of Natsuki Takaya’s manga, and that will continue with Songs and Laughter. In spite of (or maybe because of) my love for Fruits Basket, I’ve been hesitant to pick up other translated work by the creator, fearing disappointment. Can anyone recommend a title in this category?