From the stack: Oishinbo: Vegetables

I’ve enjoyed all of Oishinbo: A la Carte (Viz), but I think the new Vegetables volume is my favorite so far. For those of you who aren’t familiar with it, Oishinbo is a long-running (over 100 volumes so far), incredibly popular culinary manga written by Tetsu Kariya and drawn by Akira Hanasaki. The A la Carte editions focus on particular culinary themes, like Sake and Fish, Sushi and Sashimi, cherry picking stories from the title’s long, long run. (Viz didn’t concoct the collections; they just translated the existing ones from Shogakukan.)

One of the primary subplots of Oishinbo is the terrible, terrible relationship between its protagonist, culinary journalist Yamaoka, and his father, tyrannical gourmet Kaibara. Each is leading a different newspaper’s efforts to develop a menu showcasing the best of Japanese cuisine. In customary shônen fashion, father and son engage in highly public, extremely acrimonious contests to show who knows more about food.

In Vegetables, this kind of content is relatively minimal. And while I’ve enjoyed it in the past, I was surprised by how much I enjoyed the relative absence of their caustic bickering. The volume starts with a multi-part but still relatively short cabbage battle that’s fairly standard for their showdowns, then moves on to what I can only describe as food pyramid comeuppance theatre. People often bemoan the lack of vegetables in the average diet (when they aren’t wondering how they can possibly consume as many of them as nutritionists recommend), but Kariya and Hanasaki take it to another plateau.

The nationalism that often adds zing to these pages is replaced by naked proselytizing not only on the health benefits and succulence of vegetables but on how to grow them. Because if you do it wrong, you will kill every living creature on the planet and blight the habitat for centuries to come, not even to mention how bad they’ll taste during your last, miserable hours of life. I’m not going to refute that argument, but I will just suggest you pity the characters who take pesticides lightly, as Kariya and Hanasaki ensure that they will pay. (Hilariously, there’s also a chapter where Yamaoka and company conspire to convince someone to sell his land for the building of an automobile factory, because there are no environmental or health consequences there, right?)

But there’s more to this volume, which consists of what feel like more short tales than usual. In addition to the short-sighted corporate pawns who must suffer for their acquiescence to chemical agriculture, there’s a delightful variety of people whose problems can only be solved (absurdly) by vegetables. There’s the estranged couple and their fateful argument over asparagus, and the child who will never win his class election unless he learns to choke down eggplant. There are mighty to be humbled and humble to raise up through the power of vegetables.

So in other words, it’s preachy and crazy, with lots of good information mixed in and perfectly serviceable stock characters to hold the chopsticks. Even if you don’t consider yourself a foodie or found previous volumes of Oishinbo wanting, you might want to give Vegetables a look. It’s a hoot. 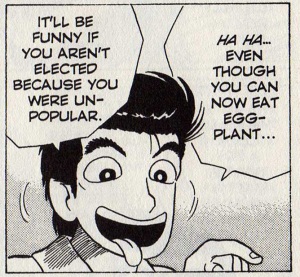 Note: John Jakala posts one of my favorite panels from this volume, and the weird thing is that it’s fairly representative of the kind of declarations you will find within.

This entry was posted on Thursday, October 1st, 2009 at 4:34 am and is filed under From the stack, Viz. You can follow any responses to this entry through the RSS 2.0 feed. Both comments and pings are currently closed.

4 Responses to From the stack: Oishinbo: Vegetables