I’m just not feeling the ComicList this week. When the big manga releases have been in print in English for years, I just can’t get all that excited. I’ve also got to say that the publisher’s utter lack of anything resembling even minimal marketing efforts bothers me. They seem to understand how competitive the market is for translated manga, but they’ve never sent out a press release, haven’t built even a rudimentary web site, and have given only a single interview barely a week before the release of their first round books.

Listen, I’m not saying I want more press releases in my inbox, but I am saying that even successful, high-profile publishers with good bookstore saturation work hard to spread the word about their products. It’s not encouraging to see the much-anticipated direct entry of a major Japanese publisher into the translated-manga market be conducted with a caution and reticence that seems to verge on agoraphobia.

So forget the new stuff. I’ll take the occasion and the fast-approaching Halloween to recommend a really entertaining but neglected horror comic: 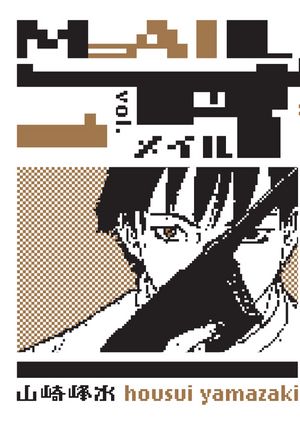 You may know Housui Yamazaki as the illustrator of the very entertaining The Kurosagi Corpse Delivery Service, written by Eiji (MPD Psycho) Otsuka. Or you may not; it’s got a devoted following, but it’s never exactly set the sales charts on fire. That’s obviously a shame too, but today we’re talking about Yamazaki’s solo effort, the three-volume Mail.

If Kurosagi can be described as an older-skewing Scooby Doo with actual ghosts, Mail is more in the line of The Twilight Zone hosted by Richie Brockelman, also with ghosts.

Master of ceremonies Reiji Akiba can see ghosts. (Exactly how that came to be is explained in an origin story in the third volume.) They’re definitely on the malevolent end of the spiritual spectrum, but not to worry. He’s got just the means of dealing with them. 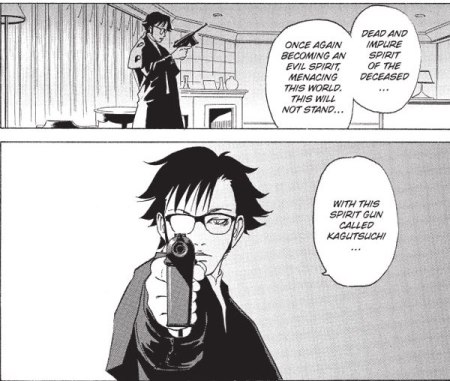 Yes, it’s exorcism at gunpoint. The majority of the three volumes are a collection of stand-alone stories, with generally innocent people running afoul of nasty ghosts and Akiba coming to their rescue. I’m not going to claim that it’s a wildly novel concept, but Yamazaki executes it very well. I could have read more volumes of the series, but I’m happy to revisit the three I have, especially at this time of year.

Yamazaki is a sharp and imaginative illustrator, and he really has a handle on episodic storytelling. He’s got a sly sense of humor and a knack for building suspense in a relatively small number of pages. If you’re looking for some stylish shivers in a series that doesn’t demand a big investment of time or dollars, Mail is an excellent choice.

There are a number of series that fall into the category of engaging, episodic horror. What are some of your favorites?

Oh, to be 14 again and able to drink like that! Ah, nostalgia. Anyway, just a reminder that I’m giving away a copy of the first volume of Jiro Taniguchi’s A Distant Neighborhood (Fanfare/Ponent Mon). Click here for details, or… y’know… scroll down a little bit.

In other Taniguchi news, Kate Dacey has posted a thoughtful review of Taniguchi’s other recent release, The Summit of the Gods. Over at About.Com, Deb Aoki offers a manga-rich preview of this weekend’s Alternative Press Expo in San Francisco. Fanfare will be there, along with other providers of high-quality comics from Japan. And you should buy a copy of the new hardcover of Fumiyo Kouno’s Town of Evening Calm, Country of Cherry Blossoms from Last Gasp, because it’s one of the most beautiful comics ever made.

Comments Off on Out and about |