Update: Hi! If you’re coming here from MTV Geek, welcome! I’ve actually migrated all of the content at this site to my new blog site, part of the Manga Bookshelf group. There’s lots more fruitless longing for comics I’m as yet unable to read there, plus reviews and other stuff, so please come visit, if you’re so inclined. Now, on to your scheduled relevant content:

I’ve already decided that 2010 will be the year of Natsume Ono, so what better way to kick things off than with a license request. In addition to her lovely seinen work, she also creates yaoi under the name Basso. I’m fairly picky about yaoi, but I already have enormous trust in Ono’s sensibilities. She seems interested in portraying rounded human experiences. Her characters have lives and jobs, and she seems scrupulous about rendering the places and times in which they live. Those qualities are some of the biggest deciding factors in whether or not I’ll like a given yaoi title.

I’ve found three of her yaoi works, all published by Akane Shinsha, about which I know nothing. Here’s Akane Shinsha’s frequently not-safe-for-work web site, which doesn’t send one into romantic and sensual raptures, but it’s navigable, so that’s something. 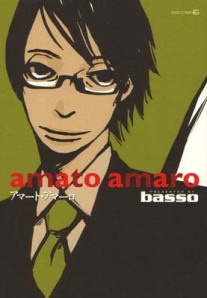 First up in the Basso catalog is amato amaro, which is about an apparently bi-curious economist who asks his bodyguard to help him explore. In the real world, this is known as a potentially hostile work environment, but this is yaoi, where potentially hostile work environments are sometimes required to inspire sexy time. Ono does nice work with bodyguards who have ambiguous relationships with their employers. She also seems to occasionally favor lower-case titles, which is only mildly annoying, because the actual comics are so awesome. 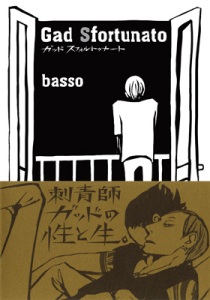 Last is Kuma to Interi, a collection of interconnected short stories which features a liason between waiters and politicians, among other things. Among those other things is a story called “Bear and Intellectual,” which is actually the title of the volume, and if “bear” is being used in the sense that I think it is, WANT WANT WANT WANT WANT. The promise of yaoi featuring a character with secondary sex characteristics beyond the vague suggestion of an Adam’s Apple is almost overwhelming to me. I’m seriously beside myself.

I don’t know which yaoi publisher would be most likely to publish these books. I don’t really care. There’s a bear in them there hills. Don’t make me wait.