2010 hits the ground running, at least in ComicList terms. I hope you got cash for Christmas or are fit enough to supplement your income by shoveling the driveways of neighbors. 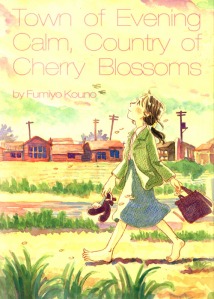 It’s been available in English for a few years, but that doesn’t stop me from making the hardcover collector’s edition of Fumiyo Kouno’s glorious Town of Evening Calm, Country of Cherry Blossoms (Last Gasp) my pick of the week. In my opinion, this is still one of the finest comics from Japan ever to be licensed. Don’t believe me? Check out reviews from Lorena (i ♥ manga) Nava Ruggero and Kate (The Manga Critic) Dacey.

I only know what Drawn & Quarterly tells me about Imiri Sakabashira’s The Box Man, but I do know that they’ve got excellent taste in comics from Japan (and everywhere else). What does the publisher promise? An “absurdist tale in a seamless tapestry constructed of elements as seemingly disparate as Japanese folklore, pop culture, and surrealism. Within these panels, it becomes difficult to distinguish between the animate and the inanimate, the real and the imagined, a tension that adds a layer of complexity to this near-wordless psychedelic travelogue.”

Quick, something a little more undemanding! CMX to the likely rescue! They debut The World I Create, written and illustrated by Ayami Kazama. It’s about students with the ability to create virtual realities, and it looks kind of charming.

I was crazy about godly pantheons as a kid, particularly the Greek. It never translated into a particular love for comics versions of characters like Hercules, but I was always fascinated, probably because the mythology was so much like a soap opera with extra smiting. As I really admired George O’Connor’s abilities as a cartoonist in Journey into Mohawk Country as well, I’ll definitely give First Second’s Zeus: King of the Gods a good long look.

I’m apparently not supposed to call them “pamphlets” any more, though I thought that was the preferred term over “floppies.” “Flimsies” it is. There are two such publications out this week that show much promise: the fourth issue of Brandon Graham’s King City (Image) and the second issue of Stumptown (Oni), written by Greg Rucka, illustrated by Matthew Southworth, and colored by Lee Loughridge. Thanks again for making my browser crash, Image.

Now, for the costliest portion of our program: the new shôjo, which I will simply list in alphabetical order because there’s so much of it:

So what looks good to you?

Update: I forgot to mention this one, but Marvel does a really quick turnaround on producing a trade paperback of its Marvel Divas mini-series, written by Roberto Aguirre-Sacasa and illustrated by Tonci Zonjic. I enjoyed it very much in flimsy form, though I’m sad to see that they apparently use that hideous J. Scott Campbell cover for the collection. You’ll understand if I don’t illustrate this paragraph with a thumbnail, won’t you?

The latest of Deb Aoki’s reader’s polls is a tough one: Best New Seinen/Josei – Drama. The slate is a veritable embarrassment of riches, but I cast my vote for…

Speaking of that fine book, it leads Jog’s list of Top Ten Comics of 2009. And speaking of Jog, he ponders the various allures of Death Note in the latest installment of The Comics Reporter’s Holiday Interview series.