The focus of this week is Iou Kuroda’s Sexy Voice and Robo (Viz), and while I’ll happily suspend some of this blog’s regular features, the Manga Moveable Feast seems like a good opportunity to cast a spotlight on some of Kuroda’s unlicensed work. I’ve already made a plea for his eggplant-inspired Nasu, so the next logical choice is Japan Tengu Party Illustrated. 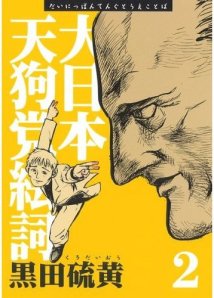 This four-volume series originally ran in Kodansha’s Afternoon magazine and was later collected in a three-volume set, as near as I can tell. Let me just tell you that this title has been pirated within an inch of its life. There are about three pages of copyright-violating search results. Way back in 2005, Jog named it as one of ten manga he’d like to see licensed. Here’s his description:

“This was Kuroda’s first-ever extended narrative work, the only one (I believe) to build to a finale, four volumes of aged martial-arts master bird spirits inhabiting human costumes and periodically jumping out to flap around. They’re often rude and/or lazy, even though they’re nominally around to punish vanity, and there’s a pair of mysterious girls hanging around them, one of whom might be an artificial twin of the other, except she looks and acts nothing like her. Rendered in a rough, thick, black-heavy style. A beauty!”

Some of you may already be familiar with tengu courtesy of Kanoko Sakurakoji’s Black Bird (Viz), but I’m not a fan of that title, so I’ll hold out hope for an English version of Kuroda’s take on this class of yôkai.

This entry was posted on Friday, February 12th, 2010 at 10:03 am and is filed under License requests, Linkblogging. You can follow any responses to this entry through the RSS 2.0 feed. Both comments and pings are currently closed.