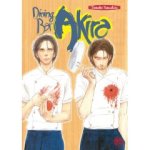 I mentioned yesterday that Fanfare/Ponent Mon is re-offering Japan as Viewed by 17 Creators in the new Previews catalog, and I felt like I should note some other “offered again” items of note:

As you may have surmised, Dark Horse is re-offering just about all of their first volumes.