Read of the day

In the new Publishers Weekly Comics Week, Kai-Ming Cha contributes a terrific piece on the new manga initiative from Fantagraphics. My favorite paragraph:

“‘There is a vast mount of [manga] material out there for intelligent adults,’ Thorn said, ‘and yes, I think there is a market. In fact, I think it will become a major market.’ Fantagraphics president and co-publisher, Gary Groth, is also unconcerned about catering to an established market. ‘Our publishing philosophy is, if we publish something good, and we market it well, it will find a readership.'”

I assumed that Natsume Ono’s Ristorante Paradiso (Viz) would be the pick of the week, and I think it’s very good, but I have to say that Bunny Drop (Yen Press) took me by very pleasant surprise. Let’s see what else will arrive on Wednesday.

Of course, Bunny Drop could just be the debut pick of the week, leaving room for me to single out an ongoing option and rejoice over the arrival of the second volume of Time and Again (Yen Press), written and illustrated by JiUn Yun. I found the first volume to be absolutely delightful, and I can’t wait to learn more about the woman with the positively menacing bouffant who provided that installment’s cliffhanger. 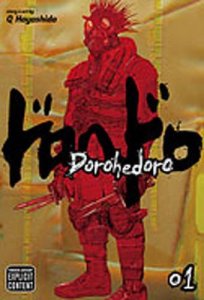 If you’re interested in the perspectives of sorcerers who navigate landscapes filled with monsters, you’ have no shortage of choices. But what if you’re more interested the monster’s point of view? Look to Q. Hayashida’s Dorhedoro (Viz) for this neglected perspective. In it, “a clan of sorcerers have been plucking people off the streets to use as guinea pigs for atrocious ‘experiments’ in the black arts.” One of those experiments is looking for payback, and he’s just the lizard-headed amnesiac to… well… okay, maybe he isn’t. I can’t say that this is my favorite series in the SigIKKI roster, but it’s got some gorgeously gritty art and an amusingly brutal sense of humor.

I’m so crazy about Banri Hidaka’s V.B. Rose (Tokyopop), so I’ll have to make a concerted effort to catch up with her I Hate You More Than Anyone (CMX), which hits the nine-volume mark. (I think there are a total of 13 in the series, which was originally serialized in Hakusensha’s Hana to Yume, which is kind of a gold mine of terrific shôjo.) Sean (A Case Suitable for Treatment) Gaffney has been reviewing the series.

From the stack: Ristorante Paradiso

Lori (Manga Xanadu) Henderson wrote a great post about “Noted Women of Manga,” and I agree with all of her choices. I’d certainly add the likes of CLAMP, Junko Mizuno, Ai Yazawa, and Natsume Ono. The thing that I admire about Ono, at least so far, is that she seems to create manga that would interest her more than it would conveniently fit into a magazine’s style. She reminds me of Fumi Yoshinaga in that way.

This might be ignorance on my part of how things work, but it’s hard for me to imagine a magazine editor saying, “We need a story about a wispy, gullible samurai to really round out our roster. Call Ono!” or “Our line would really be complete if we just had a crushingly depressing family drama. What’s Ono up to?” These very conversations may well have happened, but it strikes me as unlikely. Even the untranslated glimpses I’ve gotten of her yaoi work seem to ignore conventions of category, though that’s just a guess.

Her latest licensed work, Ristorante Paradiso (Viz), isn’t quite as odd as her other translated titles. It’s a romantic comedy set in an eatery in Rome, driven by an alienated daughter and her irresponsible mother. But it’s got those odd, appealing touches that I’ve come to associate with Ono. For one thing, the restaurant is staffed entirely by older gentlemen who wear glasses because the mother thinks this type of man is smoking hot. (One can assume that Ono shares this sentiment.)

There’s certainly no shortage of fictional dining establishments run by an army of hot young guys, but it’s nice to see Ono argue that “hot” is relative, or at least a matter of taste. Her waiters, wine stewards and chefs are a generally amiable bunch, pleased to accommodate the fetish of their boss’s wife and the whims of their clientele (within limits). And while 21-year-old Nicoletta doesn’t specifically share her mom’s predilection, she can’t quite resist its effect.

This is convenient for Olga, the mom, who abandoned Nicoletta 15 years ago to be with a hot, bearish restauranteur. Nicoletta has come to Rome to expose her mother, who concealed her previous marriage from her current husband. But the genial atmosphere of the restaurant and the specific allure of one of its waiters, sad-sack Claudio, keep Nicoletta from executing her planned revenge. Nicoletta even comes to suspect that, while Olga may have been a terrible mother, she’s a pretty interesting woman.

The book concentrates on gentle, awkward romance and low-key family drama, letting its characters amble through their various arcs at their own pace. Ono’s approach is amiable rather than dramatic. One character even goes so far as to note, “That was anticlimactic.” But that’s not problematic, as there’s nothing wrong with a comic that aims to charm rather than grip. And Ono is certainly equipped to charm, with her graceful art and enticing storytelling.

From the stack, Linkblogging, Viz |