In the near future

I’m never entirely sure what the right window is to review a book before it comes out. Write about it too far in advance, and people who might want to try the book could be frustrated by the fact that they can’t immediately act on that impulse. But I’ll run the risk with a couple of titles, as they’re both a little off the beaten track, both very good, and may well benefit from all the mentions they can get. Let me explain.

One of the first manga I ever read was Makoto Yukimura’s Planetes (Tokyopop). I was never a huge fan of science fiction, and I’m still not, but this one really had the right kind of narrative voice for me. It’s a character-driven story about orbital garbage haulers, the men and women that clear debris out of space to keep people from dying, basically. It’s very low-key and introspective, and it really struck a chord with me, even though I felt it had some imperfections.

It didn’t sell very well, which rankled me. (It’s always rankled me when books I really like don’t sell very well.) Planetes was among the licenses that Kodansha reclaimed from Tokyopop, so it’s effectively out of print. That’s very unfortunate. With two other low-key, character driven space dramas in the pipeline, I feel a possibly unwarranted, pre-emptive protective urge.

The first volume of Kou Yaginuma’s Twin Spica (Vertical) comes out May 4, 2010. It’s about a 14-year-old girl who dreams of becoming an astronaut, of coming closer to the stars she’s always loved. Asumi must overcome her father’s resistance, a rigorous entrance exam, and personal tragedies to enter a training academy.

Yaginuma renders all of Asumi’s difficulties with admirably straightforward delicacy and attention to detail. There’s plausibility to the process Asumi pursues and the examination system itself. There’s also a wonderful earnestness to Asumi’s dreams and her desire to reach out to the people who share them. Factor in the aching sadness that provides underpinnings for Asumi’s quest and you have a moving, unusual finished product. 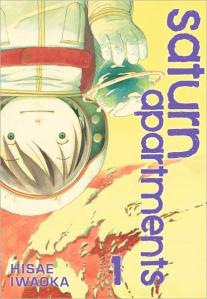 The illustrations have just the right fragility for the material. They have a simple, sketchy charm that helps you focus on the characters. There’s a similar quality to the look of the second book on my mind, Hisae Iwaoka’s Saturn Apartments (Viz), which ships on May 18, 2010. (It’s one of the titles in rotation on Viz’s SigIKKI site.)

Iwaoka’s work has the same tenderness towards her characters, but she lavishes more detail on their environments. This is all to the good, because that environment is fascinating. The titular apartments are floating in orbit above a largely uninhabitable Earth. The story’s protagonists are window washers for those apartments, which is as perilous as you might suspect. As is too often the case, the danger and drudgery of their work doesn’t come with an appropriately high salary. They live on the grungy levels, even as they clean the windows of the elite.

Young Mitsu has just taken up the work of a window washer, following in the footsteps of his dead father. We watch his evolution as a worker, and we also see the lives of his co-workers and clients. Iwaoka does a lovely job finding the possibilities in her scenario as she inches forward with Mitsu’s growth as a person.

Both of these titles succeed in finding the specific human drama in space opera. They’re graceful, wistful, and gently funny at the right moments. They don’t have the raucous bombast that can often make a book a best-seller, but they’re well worth your attention if you like interesting, sympathetic characters in fascinating situations.

(The review of Twin Spica is based on a preview copy provided by the publisher. You can read Saturn Apartments online at the SigIKKI link above.)

This entry was posted on Thursday, April 8th, 2010 at 6:07 am and is filed under Quick Comic Comments, Vertical, Viz. You can follow any responses to this entry through the RSS 2.0 feed. Both comments and pings are currently closed.

5 Responses to In the near future