This is one of those weeks where all of the ComicList heavy lifting is done by Viz Signature, whose offerings include two titles that would make any Wednesday an exciting one all by themselves. 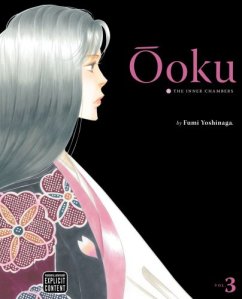 It seems like it’s been ages since we got a volume of Fumi Yoshinaga’s Ôoku: The Inner Chambers, but the wait is over. (Well, the wait is over for those of who you aren’t subject to that weird one-week delay that Diamond sometimes inflicts on Viz fans in the northeastern United States.) Ôoku recently won the James Tiptree, Jr. Award “for science fiction and fantasy that expands our understanding of gender.”

I simply do not understand why more people aren’t reading and raving about Takehiko Inoue’s glorious drama about wheelchair basketball players, Real. It’s beautifully drawn and brilliantly written, and while I know that’s never a guarantor of commercial success, it would be nice if this title got some of the level of buzz it richly deserves. The eighth volume is due Wednesday. And if you want to double your Inoue pleasure, you can pick up the seventh VizBig collection of Vagabond. I’m so behind on that one. Oh, god, I’m part of the problem, aren’t I?

I love it when I can be lazy and pull a “What she said,” and I do that a lot with Kate (The Manga Critic) Dacey. I share her sentiments about Seimu Yoshizaki’s Kingyo Used Books, which debuts this week but has been running on Viz’s SigIKKI site since its launch. Take it away, Ms. Dacey:

“The series’ episodic structure cuts both ways, see-sawing between being a fun exercise in formula — which manga will feature prominently in this story? who will be drawn into the store? — and a frustratingly obvious collection of beats culminating in a character’s decision to make a change in her life.”