From the stack: Satsuma Gishiden vol. 1

I don’t know if thoughtful ultra-violence happens as often as its creators think it does. In fact, I generally think that imposing deep-think-y stuff on splatter usually has the effect of making the think-y stuff look dumb while taking the air out of the splatter. When I do run across brainy splatter, it tends to have come from Japan. 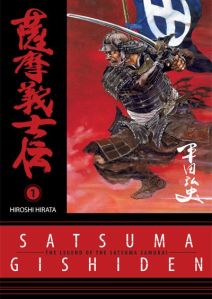 The latest example in this (for me) narrow field is Satsuma Gishiden (Dark Horse), written and illustrated by Hiroshi Hirata. It opens with a group of samurai playing some feudal version of rugby that involves trying to extract the liver from a criminal. It’s a morale-building exercise, you see. And while it’s muscularly drawn – snorting horses, thrusting spears, blood splatter that would keep the casts of five hour-long crime procedurals busy for a week – it’s also got a purposeful grimness that suggests to me that Hirata isn’t going to be blindly celebrating the samurai’s path.

Hirata shifts between displays of physical prowess and the ways it can be brutally applied and less moist passages that provide the context – the whys and wherefores of how liver soccer became a sport. The history and sociology lack the sleekness and force of the bloodshed even more than you might normally expect, but they serve the useful purpose of making that bloodshed seem less like an end in and of itself. I say “less like” because there’s too much relish in those sequences and they’re too protracted for anyone to believe that they’re entirely essential to the plot.

Still, evident as the relish for a well-drawn impaling can be, choppy as the political maneuverings can read, there’s genuine feeling here. These things matter intensely to the characters, as they should. And sometimes the pondering and the splatter work in perfect conjunction. In one sequence, the lower-class samurai take ruthless revenge on their oppressors. To call these pages beautiful is probably deeply wrong, but they work like you would not believe. They have gruesome visual fascination and substantial narrative force.

Unfortunately, Dark Horse has published only three of the six volumes of Satsuma Gishiden. They’re keeping it in print, as I picked this up via an “offered again” listing in Previews. Maybe a second bite at the apple will generate enough interest to get the rest into our hands. I know I’m going to read as much of it as I can.

Dark Horse, From the stack |