The good folks at Flashlight Worthy Book Recommendations asked if I’d like to contribute a list, and after some routine indecisiveness and procrastination, I decided to focus on single-volume manga. I tried to list books that are widely available (“In Stock” being the magic phrase) and that covered a lot of ground in terms of style and content and might have some good hooks for prose readers.

So that’s probably why I ruthlessly ignored your favorite stand-alone manga.

Comments Off on Done in one |

It’s time for our weekly look at the ComicList.

Topping the list is the eighth volume of Hinako Ashihara’s Sand Chronicles (Viz). This installment marks the conclusion of the main story, which began with our heroine, Ann, as an 11-year-old moving to the countryside and ends with her as a 20-something working woman making tough life choices and evaluating the highs and lows of the years that have passed. That long-view approach to a character’s development would be reason enough to spark interest in Sand Chronicles, but it’s Ashihara’s sensitive approach to sometimes melodramatic material that really makes this series a treasure. I’m assuming that Viz will publish the ninth and tenth volumes, which apparently feature side stories about the supporting cast. I can’t wait to read them. 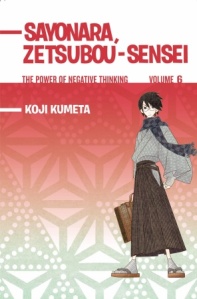 Sensitivity is generally kept to a minimum in Koji Kumeta’s Sayonara, Zetsubou-Sensei (Del Rey), when it isn’t actually called out as a target for mockery. That’s part of the charm. And really, everything is a target for mockery in this rapid-fire satire of contemporary culture, now up to its sixth volume.

The eighth issue of Brandon Graham’s King City arrives courtesy of Image and Tokyopop. We’re into the previously unpublished material at this point, and it’s very enjoyable stuff. The twelfth issue will be the last, at least according to the solicitation in the new Previews.

I can’t say enough good things about the first volume of Kou Yaginuma’s Twin Spica (Vertical), so I’ll point you to someone who says them better. That would be Kate (The Manga Critic) Dacey, who offers a lovely assessment of the volume here.

Back with Viz, we have the debut of Flower in a Storm, written and illustrated by Shigeyoshi Takaka. It’s about a super-rich guy who falls in love with a super-athletic girl and tries to hound her into falling in love with him. She can hold her own, and he’s lovable in a stupid sort of way (as opposed to a princely, know-it-all way), so the dynamic isn’t as gross as it could be (and has been). I read a review copy courtesy of Viz, and it’s not bad. I’ll probably read the second volume, but it doesn’t seem like the kind of title that will reside forever in my shôjo-geek heart. This is in spite of the fact that it was originally published in Hakusensha’s LaLa and LaLa DX, which almost always generate titles I love.

And it’s time for another tidal wave of One Piece (Viz), written and illustrated by Eiichiro Oda. We get volumes 44 through 48 and the omnibus collecting volumes 10 through 12. I plan on writing a full entry on the omnibus sometime in the next week, because I’m tragic that way, so I’ll just note that lots of important things happen in this omnibus. This being Oda, the milestones pass much more efficiently than they would in other shônen series so that he can fixate on what seems like a side story and turn it into an epic. I’ll also note about the series in general that it reminds me of a really good Avengers run. The cast is a great mix of heavy hitters and try hard-ers, each with their own moving, consequential back story, and they’re together because they want to be. Unlike even the best Avengers runs, the cast of One Piece actually helps people rather than just responding to attacks from people who hate them. (There’s plenty of that kind of material too.)

Ed Sizemore, gracious master of ceremonies for the recent Manga Moveable Feast on Mushishi, hosted a podcast round-table on the book that’s now available at Manga Out Loud. I’m not going to lie. I find it nearly impossible to listen to recordings of my own voice. But don’t let that stop you.

Comments Off on Pod people |