Another round of the Manga Moveable Feast is underway, hosted by Kate (The Manga Critic) Dacey and examining To Terra… (Vertical), written and illustrated by Keiko Takemiya. I’m looking forward to seeing what people have to say about this book, which I think is very much in the “underappreciated gem” category. I’ll have my contribution ready on Wednesday, but in the meantime, I thought I’d repost a portion of an old Flipped column that looks at another Takemiya work, Andromeda Stories. The original column was posted at The Comics Reporter. 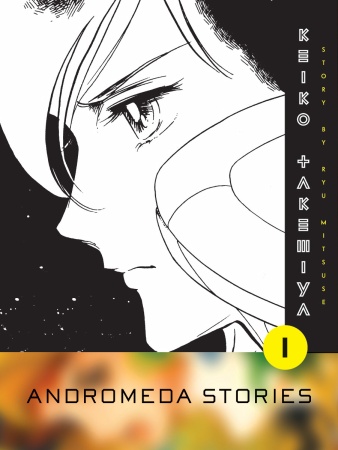 Andromeda Stories is a bit less layered, and its story is a bit more conventional. A peaceful society is infested with robotic creatures that ruthlessly remake it into an armed camp, devouring its natural resources in the process. A handful of escapees offer resistance and are joined by alien survivors of the robots’ previous invasions. 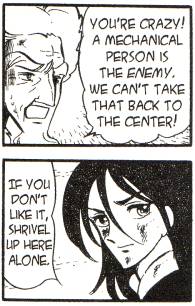 There’s considerable set-up in the first of the series’ three volumes. Takemiya lines up her pins with efficiency, but the operatic qualities seem muted as a result. There are lots of characters to introduce, sometimes twice. (To appreciate the full horror of the robot’s influence, Takemiya gives readers a sense of what the victims were like before and what was lost.) It’s heavy on plot, and it’s deftly delivered, but it lacks the moody sweep that To Terra… had from its first pages. Fortunately, that sweep kicks in with the second volume and builds through to the end.

One thing that particularly strikes me about Takemiya is her facility at showing fractures among people who share a purpose. In Andromeda Stories, those conflicts are personified by Prince Jimsa, raised in hiding and believed by many to be the world’s only hope against the robots. Interpretations of how his role will play out vary, and Jimsa is more focused on protecting his fragile, ambivalent mother than being any kind of savior. Given the number of genre elements that are woven in along the way — a secret twin, a group of extraterrestrial conspirators, a warrior woman from space, good robots, bad robots, a kindly whore and an even kindlier gladiator — it’s rather remarkable that Takemiya can juggle them all and still convey the story’s emotional core. She even finds room for comic relief.

This entry was posted on Monday, May 24th, 2010 at 9:26 am and is filed under Flipped, Linkblogging, Manga Moveable Feast, Vertical. You can follow any responses to this entry through the RSS 2.0 feed. Both comments and pings are currently closed.

2 Responses to Everyone’s headed To Terra…