During yesterday’s discussion of manga Rachel Maddow might like, Dirk Deppey pushed the boundaries by suggesting manga that Rachel Maddow might like were it to be published in English. (For all I know, Maddow might read Japanese or French fluently in addition to her other super-powers.) He pointed me in the direction of Ebine Yamaji, and while I resisted the siren call of scanlations, her comics do sound pretty great. 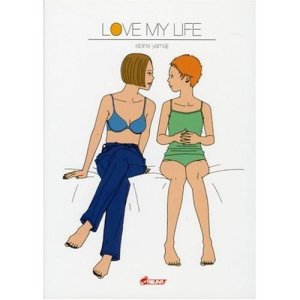 I would particularly love it if some kind soul were to pick up Love My Life. To be honest, if I was in the lead character’s situation, I’d love my life too. (Not that I don’t, but you know what I mean.)

“Ichiko Izumiya is an eighteen-year-old woman who goes to language school in university and works part-time at a music store. She lives with her father, Housei Izumiya, and he translates English novels into Japanese for a living. Her mother died seven years before the story begins. Ichiko also has a girlfriend named Eri Joujima. When she comes out as a lesbian to her father, her father shocks her by telling her that both he and her mother are also gay. They had wanted to raise a child, and had agreed to marry in name to raise a child in Japan, while mutually being in their own relationships. The rest of the story shows Ichiko meeting her parents’ lovers, her everyday life and love with Eri, in a slice of life, upbeat and positive style.”

It’s one volume long and originally ran in Shodensha’s Feel Young magazine, which has published josei by some really fabulous creators. It’s been published in French by Asuka. You can also look at some preview pages (in Japanese).

This entry was posted on Friday, June 18th, 2010 at 5:14 am and is filed under License requests. You can follow any responses to this entry through the RSS 2.0 feed. Both comments and pings are currently closed.