As we dive into this week’s ComicList, I’ll remind you that I’ve already named a pick of the week (the second volume of Kou Yuginami’s Twin Spica from Vertical), but there’s lots of other interesting material on its way.

I was a big fan of Chigusa Kawai’s dreamy, intense La Esperança (DMP), so I have high hopes for Kawai’s Alice the 101st (also DMP). It’s about an elite music school that admits an out-of-nowhere prodigy at the violin. Kate (The Manga Critic) Dacey gave it a provisional thumbs-up, noting that it’s “haping up to be a very entertaining series about a young musician learning the hard truth: there’s only one way to get to Carnegie Hall.” 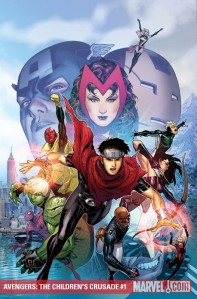 If Young Avengers had come out with any regularity, I might not have abandoned Marvel entirely after the systematic trashing of the character of the Scarlet Witch. Young Avengers creators Alan Heinberg and Jimmy Cheung reunite for Avengers: The Children’s Crusade, which features the teen super-team searching for the Scarlet Witch and teases the possibility that one of the company’s first major heroines might be repaired and redeemed. It’s nine issues long and will be released bi-monthly, which is kind of frustrating, but it’s not exactly onerous in terms of cost, just patience.

I’m always game for one of Rick Geary’s Treasury of XXth Century Murder offerings. This time around, he tells the undoubtedly gruesome tale of The Terrible Axe-Man of New Orleans, which promises “Nights of terror! A city awash in blood! New Orleans right after the First World War. The party returns to the Big Easy but someone looks to spoil it. Grocers are being murdered in the dead of night by someone grabbing their axe and hacking them right in their own cushy beds!” It sounds perfectly charming, doesn’t it? 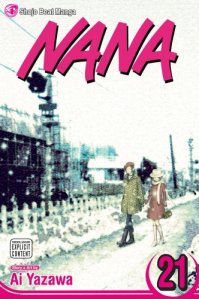 It’s a big week for Viz, so I’ll focus on two books. My Viz shônen pick of the week would have to be the 54th volume of Eiichiro Oda’s One Piece. I’m a little behind on the recent volumes, but it won’t take me very long to catch up.

My Viz shôjo pick of the week would have to be the 21st volume of Ai Yazawa’s gorgeous NANA, sexy rock-and-roll soap opera that should appeal to anyone who might like that sort of thing, because it’s really one of the best examples. Speaking of Yazawa, her English-language debut, Paradise Kiss (Tokyopop), will be the next subject of the Manga Moveable Feast.

Last, but not least, I’m always up for a new volume of Time and Again (Yen Press), sly supernatural comeuppance theatre from JiUn Yun.