As you’ve undoubtedly noticed by now, I can talk about the same titles over and over again if I love them enough. Saika Kunieda’s Future Lovers (Deux) is certainly right up there on the list of books I can and will ceaselessly flog. It belatedly occurred to me that it might be time to start begging for other works by Kunieda to be licensed for publication in English.

In exploring the rest of her catalog, I made a happy discovery that shouldn’t be surprising. Like Natsume Ono and Fumi Yoshinaga, Kunieda isn’t a specialist. She doesn’t just make yaoi. Now, there’s not a thing in the world wrong with just wanting to make one kind of comic, but there’s something about creators who do yaoi and whatever else they please that virtually guarantees I’ll love their work.

Looking at Kunieda’s profile at Baka-Updates, it quickly becomes clear that she’s a candidate for this personal hall of fame. She’s published comics in yaoi, josei, seinen and shôjo magazines, and she’s done a ton of one-shot stories all over the place. Where should one start with the pleading? Working with the assumption that artists get better with experience, maybe I should focus on her most recent work. 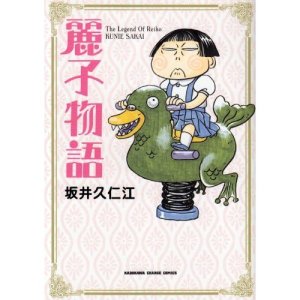 There’s Reiko Monogatari, a one-volume comedy seinen that ran in Kadokawa Shoten’s Comic Charge in 2007. It seems to be about a weird, possibly unpleasant little girl.

In the yaoi category, there’s her one-volume 50 x 50 that ran in Libre Shuppan’s Magazine Be x Boy. It’s about co-workers who consider each other hated rivals until they wind up in bed together.

And over in josei-ville, there’s her one-volume Falling in Love Even if I Wake from the Dream, originally published in Akita Shoten’s Miu magazine. It follows the romantic progress of a woman from her schooldays to her marriage.

Honestly, I’ll take any of them, but perhaps those who are a bit more familiar with Kunieda’s body of work might point me in a more specific direction? Can you confirm or deny that she’s awesome, no matter what she undertakes? I always like to be able to focus my greed.