We’ve reached a great letter in the seinen alphabet, at least in terms of licensed manga. “E” is for…

We’ll start with Eden: It’s an Endless World! (Dark Horse), written and illustrated by Hiroki Endo, which is a dense and violent science fiction tale of the world after a pernicious outbreak. The human population has been decimated and is trying to rebuild itself while military and corporate forces scheme in the background. It’s great stuff, if not wildly commercially successful, which is too bad. It originally ran in Kodansha’s Afternoon.

Some people find it difficult to believe that Kaoru Mori’s lovely Emma (CMX) originally ran in a seinen magazine (Enterbrain’s near-perfect Comic Beam), but it did. It’s a glorious tale of a Victorian maid and her romance with a young man from the emerging upper middle class. Roughly 1,000 bloggers wrote about it in this installment of the Manga Moveable Feast.

Fuyumi Soryo may be more well known for her shôjo work, but she has at least one brilliant seinen series available in English: ES: Eternal Sabbath (Del Rey). It’s about powerful psychic clones trying to figure out where they fit in human society with sometimes violent and disturbing results. Kate (The Manga Critic) Dacey wrote about it in this piece on “The Best Manga You’re Not Reading.” ES originally ran in Kodansha’s Weekly Morning.

Ask any random group of manga diehards what series they’d like to see rescued from publishing limbo, and you’re likely to hear a lot of them answer Even a Monkey Can Draw Manga, a delightfully blistering industry satire from Koji Aihara and Kentaro Takekuma. Viz published one volume of it, and the second and third volumes still lurk out there, teasing us all. It was originally serialized in Shogakukan’s Big Comic Spirits.

I’ll confess to only a passing familiarity with Rikdo Koshi’s Excel Saga (Viz), which is serialized in Shonen Gahosha’s Young King OURs. Please feel free to jump in the comments and try and convince me that I should expand my knowledge of this series. 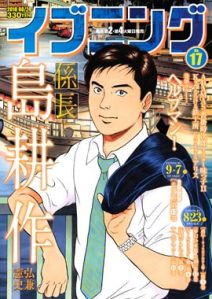 Many of my license requests come from Kodansha’s seinen magazines, but I don’t recall asking for much from Evening yet. I think Masayuki Ishakawa’s Moyasimon (Del Rey) was picked up before I started the feature. Still, Endo has another series from Evening called All Rounder Meguru that might be promising. It’s about mixed martial arts. Here’s Evening’s Japanese site.

What starts with the letter “E” in your seinen alphabet?

This entry was posted on Wednesday, August 18th, 2010 at 9:38 am and is filed under The Seinen Alphabet. You can follow any responses to this entry through the RSS 2.0 feed. Both comments and pings are currently closed.

4 Responses to The Seinen Alphabet: E