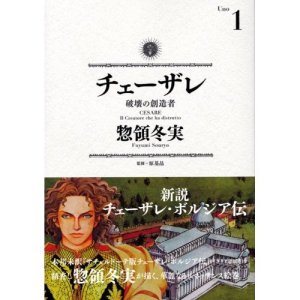 Since we’re sort of on the subject of women who make comics for seinen magazines, it seems like a good (if belated) time to bring up Fuyumi Soryo. Actually, it’s never a bad time to bring up Soryo, given the fact that she has excellent work available in English. There’s Mars, a shôjo title published by Tokyopop that originally ran in Kodansha’s Betsufure, and ES: Eternal Sabbath, a seinen series published by Del Rey that originally ran in Kodansha’s Weekly Morning.

Waiting in the wings, and still running in Kodansha’s Weekly Morning, is Cesare, which looks into that most fascinating family of Renaissance schemers, the Borgias. You may already be familiar with another manga rendering of this clan in the form of You Higuri’s Cantarella (Go! Comi). That’s sort of a sparkly, bishie-quasi-vampire-angel take on the family, full of sold souls and unsettling bisexual longings, and it’s awesome, but the Borgias are weird enough to invite multiple interpretations.

People who have read Cesare compare it favorably to Vinland Saga and Historie, which is high praise indeed, since both of those series are supposed to be incredible. I’ve also seen praise for the depth of historical research Soryo has undertaken in creating the series, and it’s a fascinating period, so it will probably reward readers in that regard. Here’s the link to Kodansha’s page on Cesare. 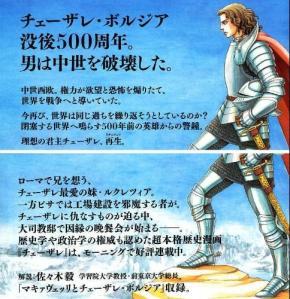