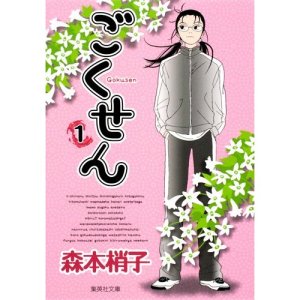 This week’s letter in the Seinen Alphabet led to mention of a likely excellent josei title that starts with “G.” It’s Kozueko Morimoto’s Gokusen, originally serialized in Shueisha’s You. I’ll turn to Wikipedia for the nuts and bolts:

“The plot involves Kumiko Yamaguchi, the granddaughter of a Yakuza boss, Kuroda of the Kuroda Ikka. Her parents died when she was younger, and her grandfather has no other descendants, so Kumiko is next in line to head the family business with the title of Ojou. However, her lifelong dream has been to become a teacher. While her grandfather approves of her choice, others in the family want her to become the next boss.

“Kumiko (known by her students as ‘Yankumi’) becomes a teacher at an all-boys private high school. Her class is full of delinquents, but she tries her hardest to teach them not just about academics (her subject is Mathematics), but about lessons of life, much like any ‘dedicated teacher’ story. Though she’s forced to keep her family a secret from the public, her Yakuza upbringing gives her the strength and the experience to reach out to her students, while also providing comedic relief.”

Since it will likely be a while before someone picks up the charming My Darling! Miss Bancho, left in a cage at the homeless manga shelter by CMX, this would be nice compensation, don’t you think? A forthright young woman dealing with a horde of delinquents in unexpected ways? I’m game.

And perhaps Viz is game as well, with its recent, stealthy attempts to fold josei into its Shojo Beat line.

(And yes, I know that there are well-liked anime and live-action adaptations of this series. That’s great. This is the Manga Curmudgeon. Not the Adapted Franchise Products Curmudgeon.)