Since I’m clearly in a shôjo place, it seems only appropriate to devote this week’s license request to one of the blockbusters of the category. And since Fantagraphics talked smack about it in its efforts to market Moto Hagio’s A Drunken Dream and Other Stories, what better choice is there than Naoko Takeuchi’s Sailor Moon?

I’m not quite sure how many of the comic’s 18 volumes were published in English by the company that would eventually become Tokyopop, and I know it was serialized in Tokyopop’s MixxZine, but the collected volumes are out of print and kind of pricey, so it’s well past time to make it readily available. I think the license for it actually expired before original publisher Kodansha took all of its licenses back from Tokyopop. 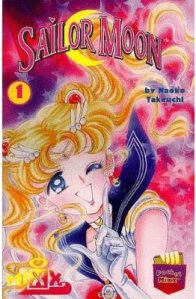 It’s credited with breathing new life into the magic girl manga genre in Japan, and it’s also credited with really firing up the demand for shôjo in the United States. Do I need to tell you what it’s about? I do? Okay:

“The protagonist of Sailor Moon, Usagi Tsukino, an ordinary ditsy middle-school girl- or so she thinks- discovers a talking cat named Luna, who reveals Usagi’s identity as “Sailor Moon,” a special warrior with the destiny of saving the planet Earth, and later the entire galaxy. Usagi, who is the reincarnation of the Moon Princess, must now protect Earth from a series of villains, beginning with the Dark Kingdom that had appeared once before, long ago, and destroyed the kingdom of the moon.”

Basically, Usagi assembles a team of really powerful, astronomically accessorized friends who discover their destinies and save the world from people who have no love in their hearts. (They know who they are.)

The series was published in French by Glénat, though it seems like it might be out of print. As to who should republish it in English, well, that’s always a tricky question with Kodansha. They seem interested in keeping their classics back in print, especially if it requires no real effort to do so. But at the same time, it would be kind of fun if Fantagraphics, known in part for its archival impulses, would atone for its earlier snark by putting Sailor Moon back on the shelf in a prestige format.

Come on… The Complete Sailor Moon… Tell me that’s not an awesome idea.

This entry was posted on Friday, September 10th, 2010 at 10:06 am and is filed under Uncategorized. You can follow any responses to this entry through the RSS 2.0 feed. Both comments and pings are currently closed.