It’s precision vulgarity week on the ComicList! By this I mean that there are a bunch of comics out this week that use shocking, potentially distasteful material to very good effect. 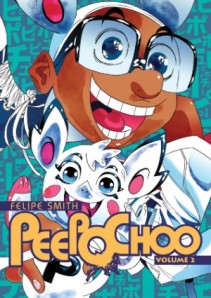 First up is the second volume of Felipe Smith’s Peepo Choo (Vertical). I agreed with Kate (The Manga Critic) Dacey on virtually every point regarding the first volume, but especially this one:

“Yet for all its technical virtuosity, there’s a hole at the center of Peepo Choo where its heart should be.”

Smith rectifies that in the second volume, and he endows his ensemble of losers and freaks with a level of sympathy notable in part for its near-total absence the first time around. It’s not that he’s any kinder to his cast. He dangles possibility in their paths only to yank it away. But their pains and disappointments feel more like a properly moving experience than a dazzling exercise in narrative cruelty, and Smith rounds out even the type-iest of members of his cast. The characters in Peepo Choo – the nerd who finally gets to go to his otaku holy land, the creepy jerk who just wants to lose his virginity, the spree killer who yearns to embody American phrases he doesn’t even understand, the smartest girl in class who’s undermined by her own body – all edge closer to a full, possibly crushing understanding of and liberation from their own misery (or at least the teasing promise of liberation).

The book is still brutally violent and creepily sexed up, but there’s nothing clumsy about the application of this kind of content. Smith knows exactly what he’s doing when a character spits a tooth in someone’s eye and another gets aroused watching it happen. I had my doubts that he was going anywhere particularly, peculiarly interesting with this kind of effect based on the first volume, but the tone really clicks this time around, and I’m abidingly curious as to how things will wrap up in the third and final book. For me, good satire, especially satire of individual obsessions and cultural fetishes, has to have a beating heart, something that pushes the reader past pity and into empathy, however limited, with the satire’s objects and victims. Smith makes that leap. (These remarks are based on a complimentary copy provided by the publisher. Oh, and Melinda [Manga Bookshelf] Beasi agrees with me, which I always take as a good sign.) 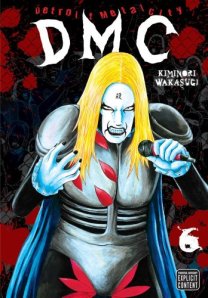 It isn’t nearly as dense or ambitious as Peepo Choo, but the sixth volume of Kiminori Wakasugi’s Detroit Metal City (Viz) is likely to be as coarse and funny as the previous installments. If you’re in the San Francisco area on Saturday, Sept. 18, you can catch the live-action movie adaptation of the death-metal satire, which is supposed to be pretty great.

It’s not on the ComicList, but the shop in my area lists the sixth volume of Adam Warren’s hilarious and smutty super-hero satire, Empowered (Dark Horse), as due to arrive tomorrow. This time around, Warren looks at the often transitory nature of death among the spandex set. 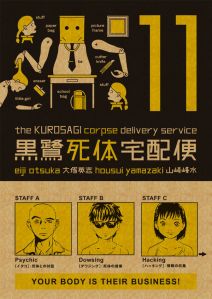 And the 11th volume of The Kurosagi Corpse Delivery Service (Dark Horse), written by Eiji Otsuka and illustrated by Housui Yamazaki, is a very welcome arrival indeed. This series takes a satirical look at ghost stories, people who help the dead reach their final reward, and pokes fun at the ambivalent ways we respond to the shuffling off of our mortal coil.