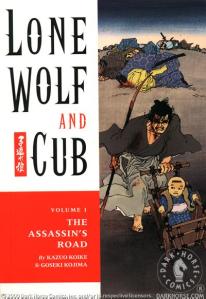 Well, we have to start with Lone Wolf and Cub (Dark Horse), written by last week’s poster boy, Kazuo Koike, and illustrated by Goseki Kojima. It was one of the first manga series to be published in English, and it’s one of those series that many comics fans who don’t normally read manga might have read. It originally ran in Futubasha’s Weekly Manga Action and is 28 volumes long. 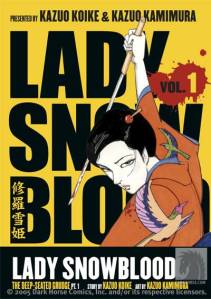 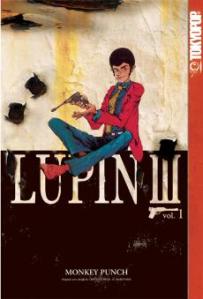 Lots of people probably have some fond memories of Lupin III, written and illustrated by Monkey Punch and originally serialized in Weekly Manga Action. Tokyopop has published all 14 volumes of the series, and Cartoon Network used to broadcast episodes of the very likable anime adaptation of the capers.

I’m not sure how many people have fond memories of Lament of the Lamb, written and illustrated by Kei Toume. It’s a seven-volume vampire series that was originally serialized in Gentosha’s Comic Birz and was published in English by Tokyopop.

Sadly, Minoru Toyoda’s funny, sweet and quirky Love Roma is one of those series that may be in limbo thanks to the recent shifts between Del Rey and Kodansha. The five-volume series originally ran in Kodansha’s Afternoon.

Last Gasp publishes a lot of interesting prose and comics, some of them from Japan, and Junko Mizuno’s Little Fluffy Gigolo Pelu was probably my favorite debut of 2009. The series originally ran in Enterbrain’s glorious Comic Beam. I would like the second volume now, please, thank you.

What starts with “L” in your seinen alphabet?