It’s time for another look at the week’s ComicList!

Tokyopop has a bunch of titles coming out, and my pick of that lot would be the tenth volume of Banri Hidaka’s V.B. Rose, a romantic comedy about a budding designer of accessories working in a high-end bridal shop.

Random House’s Del Rey manga imprint may be on its last legs, but it’s releasing a healthy volume of titles all the same. I was surprised by how much I enjoyed the first volume of Akimine Kamijo’s Code Breaker, so I’ll be looking for the second.

I’ve also been surprised by how much I’ve been enjoying Marvel’s Secret Avengers series, so I’ll also grab a copy of the sixth issue, which features a visit from the Master of Kung Fu. 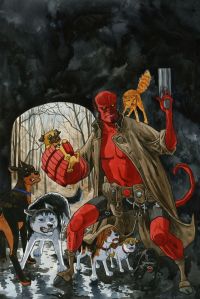 I have no excuse for not yet sampling Beasts of Burden from Dark Horse, and perhaps the Beasts of Burden/Hellboy One-Shot isn’t the best introduction to the series, but I think I’ll grab it all the same, just because I know my comic shop will probably have a copy handy.

This entry was posted on Tuesday, October 26th, 2010 at 9:17 am and is filed under ComicList, Dark Horse, Del Rey, Marvel, Tokyopop. You can follow any responses to this entry through the RSS 2.0 feed. Both comments and pings are currently closed.