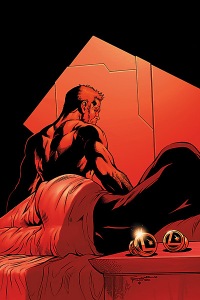 I fell into a nostalgia pit trap this week after seeing the write-up of the online leader ballot for DC’s Legion of Super-Heroes. That was always a fun element of the franchise back in the day, and I generally enjoyed the issues written by Paul Levitz, so it seemed like a reasonable enough excuse to give the new series a chance. After learning that the shop had sold out of the Beasts of Burden/Hellboy One-Shot , I grabbed a copy of Legion of Super-Heroes #6.

First of all, this series could really use a “Previously” page. Levitz is pretty scrupulous about inserting little tags introducing his main characters on first appearance, but there seems to be a fair amount going on that might be helpful to know. This issue is one of those “between big events” chapters that allow the cast to go off and do lots of little things that show what might be considered everyday life for a team of super-heroes in the future. Most of this involves them talking about or to a new character I don’t recognize.

He’s called “Earth Man,” and he apparently just recently switched to the Legion’s side after being a big, anti-alien xenophobe. And, again, he’s called “Earth Man.” Get it? Yeah. Oh, and he’s apparently started a sexual relationship with Shadow Lass, an alien, so he can’t be all that xenophobic, right? (Maybe he’s like one of those homophobic closet cases, scoring with aliens on the down low and making a big deal about hating them in public. I can’t believe I just typed that.) His power is to borrow the powers of other people, and most of them are aliens, which means he wouldn’t have any powers at all if he drove all the aliens off of his planet, but nobody ever accused bigots of being geniuses or writers of being coherent satirists.

Anyway, Earth Man is grumpy, square-jawed and uninteresting, U.S. Agent 2.0 (or whichever iteration we’re up to at this point), and having a lot of characters focused on him isn’t particularly entertaining or promising. It suggests that future issues will spend a lot of time interested in the evolution of Tea Party satire guy, and that’s not something I’m keen to pay for.

The back-up story has some extremely specific references to events or issues from Levitz’s first run. Cosmic Boy (who seems to be the current leader) visits the academy where they teach young heroes to possibly be Legionnaires at some point in the future. This is an opportunity for Cosmic Boy to be mopey about how hard and dangerous it is to be a Legionnaire, especially to be their leader, which isn’t a tonal element that ever worked in the past in this franchise and seems kind of 1990s to me. The worst bits of this sequence, aside from some confusing cutaways to unrelated plot points that involve women napping with their dead boyfriend’s clothing, are some really bad character designs for the trainees, both aesthetic and conceptual. By the end of the story, Cosmic Boy decides to step down as leader, which is sure to be a great confidence boost for the cadets, and the election begins.

I suppose I should comment on the art, though I’m not sure if any of these people draw the series regularly. Francis Portela draws the main story, and the pages have an interestingly light line, but there are an awful lot of weirdly heightened facial expressions. It also must have been an interesting meeting when the creative team sat down and decided to focus on costumes that combined all of the worst elements of everything the cast had worn previously. Shrinking Violet and Lightning Lass appear in a total of two panels, and my eyes still hurt, but that might owe more to the really unfortunate juxtaposition of colors.

Phil Jiminez and Scott Koblish do better with the back-up piece. Nobody looks like they’re mugging in a school play, but I have to bring up the character designs again, because they’re really bad. Gravity Kid is very “leather bar… of the future!” which I don’t object to at all personally but doesn’t really translate very well in this context. Dragonwing , with her transparent kimono, padded thigh-highs, and magenta dreadlocks, is the definition of a hot mess. Duplicate Girl sort of embodies the previously discussed costume issue – her look is a very awkward attempt to update the kind of thing she wore previously and ends up looking like PTA Lady.

It all makes you wonder if it went through any editing process. Things don’t really hang together at all. Bits seem like they’re chipped off the good raw material the Legion concept offers, but a lot of stuff seems random and sloppy. I’d suspect it would be most interesting to people who might be curious as to where it would fit into the team’s awfully muddled publishing history. I’m that guy, and it’s still not that interesting

DC, From the stack |