Hey, what’s this phone-book thing lying here on my coffee table? Why, it’s the Diamond Previews catalog! Let’s look inside! 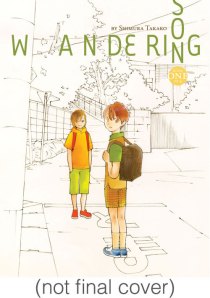 “The fifth grade. The threshold to puberty, and the beginning of the end of childhood innocence. Shuichi Nitori and his new friend Yoshino Takatsuki have happy homes, loving families, and are well-liked by their classmates. But they share a secret that further complicates a time of life that is awkward for anyone: Shuichi is a boy who wants to be a girl, and Yoshino is a girl who wants to be a boy. Written and drawn by one of today’s most critically acclaimed creators of manga, Shimura portrays Shuishi and Yoshino’s very private journey with affection, sensitivity, gentle humor, and unmistakable flair and grace. Volume one introduces our two protagonists and the friends and family whose lives intersect with their own.”

Any value-added aspects worth mentioning?

“Wandering Son is a sophisticated work of literary manga translated with rare skill and sensitivity by veteran translator and comics scholar Matt Thorn.”

Sold! Wandering Son is up to 12 volumes in serialization in Enterbrain’s Comic Beam, which is clearly one of the most fabulous magazines in human history. 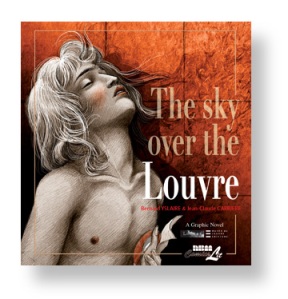 Flipping onward to page 284, we discover that NBM is publishing another of the Louvre comics, produced in partnership with the legendary museum. This one’s called The Sky over the Louvre, written by Bernard Yslaire and illustrated by Jean-Claude Carriere. This one sounds a bit less fanciful than the previous three, Glacial Period, On the Odd Hours, and The Museum Vaults: Excerpts from the Journal of an Expert. This time around, readers are taken “back to the very origins of the Louvre as a museum: the tumultuous years of the French revolution.” I don’t think we have enough comics featuring Robespierre.

Ever onward to page 288! We’ve got sensitive drama and art history, but how to round that out? Why, with gritty, contemporary detective fiction! In this case, I’m talking about the hardcover collection of the first volume of Stumptown (Oni Press), written by Greg Rucka and illustrated by Matthew Southworth. It’s about a down-on-her-luck private eye in the Pacific Northwest named Dex who gets the chance to cover a gambling debt by finding the casino owner’s missing granddaughter. Dex is a fun, tough character, and the mystery is twisty and amusingly grimy.

Toward the back of the only part of the catalog I bother to read, we learn that two manga publishers will be launching new series that originated in Hakusensha’s Hana to Yume magazine. This is generally a good sign for a shôjo series.

On page 300, we encounter the first volume of Touya Tobina’s Clean-Freak: Fully Equipped (Tokyopop), which tells the undoubtedly heartrending tale of a mysophobe going on his first school trip. On page 312, we learn of the first volume of Izumi Tsubaki’s Oresama Teacher (Viz), which sees the leader of a girl gang exiled from the city to an isolated school in the countryside. Wackiness presumably ensues.

This entry was posted on Thursday, December 9th, 2010 at 6:01 am and is filed under Fantagraphics, NBM, Oni, Previews, Tokyopop, Viz. You can follow any responses to this entry through the RSS 2.0 feed. Both comments and pings are currently closed.

One Response to Previews review December 2010