Yen Press rules the anticipatory roost this week, at least in my neck of the woods.

Fumi Yoshinaga’s Not Love But Delicious Foods Make Me So Happy arrives fashionably late to the Best of 2010 mixer, I suspect. I haven’t read it yet myself, but it’s by Yoshinaga, but it seems to be in her “irresistibly, effortlessly charming” mode. Some early responses are available from Johanna (Manga Worth Reading) Draper Carlson and Manga Bookshelf’s Off the Shelf duo of Melinda Beasi and Michelle Smith. The book inspired Kate (The Manga Critic) Dacey (who reviews the book here) to host a contest, asking readers to name their favorite culinary comics. 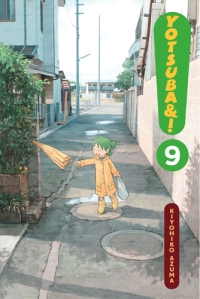 Still on the topic of irresistibly charming comics, Yen will also release the ninth volume of Kiyohiko Azuma’s Yotsuba&!, which really requires no additional endorsement beyond just saying that it will soon be available for sale. Kind of like new Yoshinaga manga, come to think of it.

I don’t really know anything about it qualitatively, but there’s something about the cover of Yuuki Iinuma’s Itsuwaribito (Viz) that would probably make me pick it up in a store and browse a few pages. I suspect it’s the cheerful woodland creature.

This entry was posted on Monday, December 13th, 2010 at 6:35 am and is filed under ComicList, Linkblogging, Viz, Yen Press. You can follow any responses to this entry through the RSS 2.0 feed. Both comments and pings are currently closed.