From the stack: Genkaku Picasso vol. 1

Between my fondness for Usumaru Furuya’s “Palepoli” strips in Viz’s Secret Comics Japan and my abiding love of episodic “psychic helper” manga, Genkaku Picasso (also from Viz) seemed likely to be a slam dunk. It’s not. 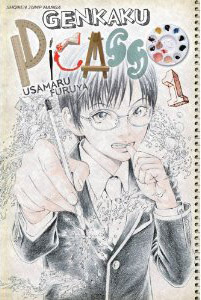 It’s about a high-school student who suffers a near-death experience and resumes life with the ability to see traumatic auras around his classmates, then capture their distress on his sketch pad. If he wants to continue to fend off premature death, he has to help these shrouded people with their issues. He’s the self-isolating type, so this isn’t a natural set of responsibilities for him, but at least he’s got the nagging, tiny ghost of a dead friend to prod him into doing the right thing.

There aren’t many surprises in the various adolescent traumas that our hero must confront, so the book’s interest is reliant on Furuya’s ability to layer compelling weirdness onto things like eating disorders, over-identification with pop idols, and daddy issues. There are some intermittent flourishes, some dollops of lurking nastiness, but the kids are on the dull side, and their woes need more verve than Furuya seems inclined to provide.

In fact, I sometimes found myself wondering if Furuya hadn’t determined on creating a satire without having any particularly novel observations on his subject other than “these are things that routinely happen in these stores.” The chapters sort of ramble through a set number of pages, not in an idiosyncratic, arrhythmic way, but in a “I have 20 pages of story to fill 50 pages of magazine” manner. I invariably lost interest before each tale’s conclusion, and I ended up concluding that, with Furuya, less may be more. He seems at his strongest when he’s being concise.

Part of the book’s problem might be that the protagonist, Hikari “Picasso” Hamura, isn’t especially pleasant company. He’s crabby when engaged, which can be a fun quality in a fictional character, and I wanted to like the fact that he doesn’t yearn for his classmates’ approval like so many of his shônen peers. But Hamura needs to be dragged into things too much, and he carps too much about how difficult his lot is. Beyond being annoying, it doesn’t read as organic. It feels more like a vamp, and a routine one at that.

The apparent time-killing gives me occasion to actively look for things that annoy me, even though I find Genkaku Picasso to be drawn very well. By volume’s end, I was improbably put out with Hamura’s pouty, blush-bruised lips. I know that the lips should barely have registered, that I had been given time to fixate on something minor and off-putting while so little was actually happening, and that it was less about the lips themselves than the fact that I’d had so little else to fill in the gaps of a rather lazy satire of a familiar formula.

I’m still looking forward to Furuya’s Lychee Light Club, due out from Vertical in April. It promises a much higher degree of adolescent perversion without any filter necessitated by placement in a shônen magazine while still being able to twist shonen conventions into knots. Maybe it was overly optimistic to expect that from Genkaku Picasso?

This entry was posted on Tuesday, December 14th, 2010 at 6:12 am and is filed under From the stack, Viz. You can follow any responses to this entry through the RSS 2.0 feed. Both comments and pings are currently closed.

5 Responses to From the stack: Genkaku Picasso vol. 1