I’m not going to claim that I’ve loved everything of Osamu Tezuka’s that I’ve read. Pinocchio remodels are right after Peter Pan tales in the list of things that make me lose patience, so I’ve only sampled Astro Boy (Dark Horse). Swallowing the Earth (DMP) had a crazy verve that couldn’t quite compensate for its ultimate clumsiness. 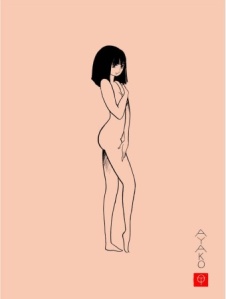 Ayako (Vertical) adds another to the roster of Tezuka works that I just can’t fully endorse, and I’m still figuring out why that is. It’s a sprawling, serious-minded saga of familial disintegration, which can promise all kinds of good times, but those fail to materialize in this case. Tezuka is on his almost-best behavior here, and while it makes me feel rather shallow for saying so, I wish he’d worn the lampshade a bit more often.

The weird and marvelous thing about Tezuka is that the puckish quality of his storytelling – the human tempura, the pansexual masters of disguise, the just-a-trunk warriors – doesn’t diminish its force. He can still make moving and persuasive arguments about morality, family and leadership without resorting to austerity. It seems that, without those flights of fancy, his gruesome assessment of selfishness and cruelty becomes almost exhausting, even rote.

The title character is the illegitimate daughter of the patriarch of a family of landed gentry trying to hold onto their property after the end of World War II. Ayako is the fulcrum of all of the family’s greedy, sexy secrets, and she suffers accordingly as her extended clan vent their frustrations, ambitions and shame on her. Given the structure of her life, it’s hard to imagine how she could emerge as a proper character, and she really doesn’t. She’s an acre of family land where the bodies are buried.

With her rendered somewhat useless in terms of specific reader empathy, who’s left? Ayako’s half-siblings seem united only in their willingness to abdicate anything like responsibility or conscience. Her prisoner-of-war older brother is spying for the occupying forces. Her sister is dabbling with the socialists, politically and emotionally. Even her amateur sleuth youngest brother is unwilling to translate his curiosity and surprisingly developed sense of justice into sustained action.

But that’s the point, I think – that moral compromise is kind of an incurable cancer, and that people, no matter what they were like at the beginning, are doomed once they take that wrong step. A tale like that can have compelling moments, but I think that progressive decay as a narrative structure becomes exhausting after a while. It certainly does here. It’s a harangue at the characters and the culture they inhabit, not an argument in which the audience can engage, which is usually the nature of Tezuka’s morality plays.

Since I’m (obviously) still working out my thoughts on this piece, I’ll point you to a couple of better-argued pieces on Ayako (which I didn’t let myself read until after writing the above). First up is Kate (The Manga Critic) Dacey, whose evaluation tracks with my own. Then, there’s Alexander (Manga Widget) Hoffman, who finds a lot to admire in the work.

From the stack, Vertical |