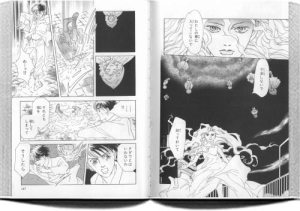 Many, many people wish that manga publishers would license more work from the Year 24 Group of pioneering shôjo creators. Unfortunately, the market doesn’t always seem receptive to classic works. No, it seems more commercially sensible to license recent works, especially award-winning recent works. But what if there was a way to give readers like myself more work from that august body of creators while working within the recent/award-winning subset? What’s that you say? There is a way? Well, heck, then, I’ll just dedicate this column to Moto Hagio’s Otherworld Barbara.

Hagio, as you likely very well know, is one of the high priestesses of the Year 24 Group. Some of her work has been published in English by Viz (They Were Eleven in Four Shojo Stories and A, A-Prime), but it’s all out of print. The Comics Journal ran a lengthy and fascinating interview with Hagio conducted by none other than Matt Thorn and even used Hagio’s art for the cover of its issue dedicated to shôjo manga. Inexplicably (all right, all right, maybe commercially explicably), publishers have not yet tripped over one another to get Hagio’s work on the bookstore shelves.

Fortunately, there’s Otherworld Barbara, which completed its four-volume run in Shogakukan’s Flowers anthology in 2005. (That was only four years ago! It’s practically new!) Otherworld Barbara, or Barbara Ikai, won the 2006 Nihon Science Fiction Taisho Award, which is presented by the Science Fiction and Fantasy Writers of Japan. The award is open to prose, comics, animation and movies, so Hagio’s win seems particularly impressive.

But what’s Otherworld Barbara about? For that, I was lucky to have the translation assistance of Erica (ALC) Friedman:

“2052 CE. The ability to step into another person’s dream exists, ‘Yumesaki Guide’ Watari Tokio has been asleep since something happened 7 years ago, when he undertook the job of entering a girl’s, Juujou (maybe Toujo) Aaoba’s, dream. And, living happily inside Aoba’s dream on the island of Barbara, a keyword unexpectedly materializes the real world.

“Watarai wants to return once again to the world inside Aoba’s dream. To procure eternal life living happily on the Island of Barbara, he conducts a strange ceremony upon himself. On the one side, a vision of Aoba’s appears, on the other an abundant ocean known as the ‘Beach of Mars’ as the story begins….”

I’ve also heard that the (catatonic? Comatose?) Aaoba was found next to her dead parents with their hearts in her stomach.

Now, it’s josei, and many publishers won’t touch that category with tongs, but it’s also award-winning, relatively recent science fiction. Just keep repeating that last part to yourselves. Plus, it’s Moto Hagio, which is reason enough to license it ASAP, in my book.

This entry was posted on Friday, July 3rd, 2009 at 4:35 am and is filed under License requests. You can follow any responses to this entry through the RSS 2.0 feed. Both comments and pings are currently closed.