It’s a momentous, manga-influenced week for the ComicList! Let’s take a look.

I can’t do any better than Oni in describing the sixth and final volume of Bryan Lee O’Malley’s wonderful Scott Pilgrim Series, Scott Pilgrim’s Finest Hour:

“It’s finally here! Six years and almost one-thousand pages have all led to this epic finale! With six of Ramona’s seven evil exes dispatched, it should be time for Scott Pilgrim to face Gideon Graves, the biggest and baddest of her former beaus. But didn’t Ramona take off at the end of Book 5? Shouldn’t that let Scott off the hook? Maybe it should, maybe it shouldn’t, but one thing is for certain — all of this has been building to Scott Pilgrim’s Finest Hour!”

O’Malley could be said to embody one version of the dream of creators who list manga among their influences. He’s got a hugely successful series, critically and commercially, with a major movie adaptation about to hit theatres. Another enviable outcome went to Felipe Smith, who first saw print as one of Tokyopop’s Original English Language manga creators with MBQ. He then went on to secure a spot in Kodansha’s Morning Two line-up with Peepo Choo. The three-volume series is now being released in English by Vertical, and the first volume arrives in comic shops tomorrow.

I read a review copy from the publisher, and I wish I liked the book’s narrative as much as I like the story behind the comic. It falls into the category of comics that aren’t really for me. It’s about a young American otaku who wins a dream trip to Japan. The kid has romanticized Japan beyond all proportion, picturing it as an Eden of manga- and anime-loving cosplayers who can all get along by virtue of their shared love for a particular character. Little does the kid know that he’s going to be mixed up with vicious gangsters, assassins, brutal teen starlets, and the far-less-idyllic reality of indigenous otaku.

Smith shows terrific energy as a creator, and I appreciate his satirical intent, but Peepo Choo is a little coarse for my tastes. I know that’s weird to say, given how much I love Detroit Metal City and Little Fluffy Gigolo Pelu, but Peepo Choo doesn’t quite have the precision with which those books use their gross-out material. The vulgarity doesn’t say as much as it could, and the satire is a little too broad to be as effective as I’d like. Still, this book should have no trouble finding an audience of comic fans who like to see their hobby tweaked and their fandoms punked, and it’s amazing that Smith has been published in a highly regarded manga magazine by a major Japanese publisher. 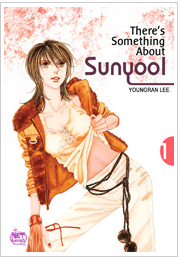 Over at the Manga Bookshelf, Melinda Beasi is running a mid-season poll on the year’s best new manhwa so far. I’m hoping that I can include Youngran Lee’s There’s Something About Sunyool (Netcomics) on this list, as it looks really promising. Here’s what Melinda had to say:

“Born the illegitimate child of a big-time politician, Sunyool has been accepted officially into her father’s household as an adult and thrown straight into negotiations for arranged marriage. While the premise seems rife with cliché, the execution (so far) is anything but. What could easily be a typical rags-to-riches or fish-out-of-water story actually appears more likely to be a thoughtful, wry look at two young people from vastly different backgrounds learning to make a life together within the cold world of politics. Sunyool’s smart (occasionally cruel) sense of humor and self-awareness make her a very appealing female lead, while her pragmatic young husband is still a bit of a mystery.”

I also might have to pick up a copy of the Young Avengers Ultimate Collection (Marvel), written by Alan Heinberg and penciled by various people, mostly Jimmy Cheung, just so I can have all those stories in one convenient package. I really enjoyed the first issue of Avengers: The Children’s Crusade that came out last week, mostly for the adorable gay super-hero boyfriends being adorable with each other, and also because a Marvel character finally suggested that there might be more to the Scarlet Witch’s behavior than her just having a bad case of babies rabies and not being able to handle her powers because, well, chicks. Also, no one suggested killing the Scarlet Witch, though her fair weather friend Ms. Marvel seems like she’d be more than happy to do so. Shut up, Ms. Marvel.

This entry was posted on Tuesday, July 13th, 2010 at 9:27 am and is filed under ComicList, Linkblogging, Marvel, Netcomics, Oni, Quick Comic Comments, Vertical. You can follow any responses to this entry through the RSS 2.0 feed. Both comments and pings are currently closed.